How stationary engines were utilised in the past, before electrical tools became readily available. 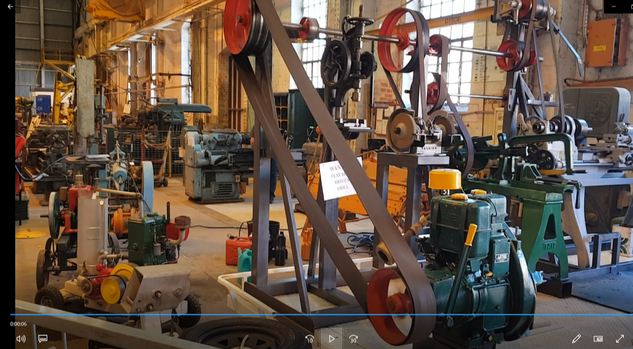 ​ This exhibit demonstrates the application of a
stationary engine powering tools as was done in
days gone by.

The green stationary engine illustrated is driving a
belt-shaft which in turn is powering a Drill, Grind-
stone, sheep shearing equipment, metal Hack-Saw
and a Lathe by belts.

These belt driven systems were universally
employed on farms, in mills and in factories. 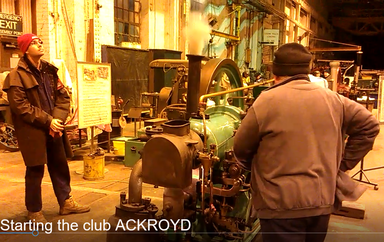 "Improvements in Engines Operated by the Explosion of Mixtures of Combustible Vapour of Gas and Air". This patent describes the World's first compression-ignition engine. It describes how, after the combustion chamber or vaporiser has been externally heated by a blowlamp.... " the induction stroke which is the first outward stroke, instead of drawing into the cylinder a mixture of hydrocarbon vapour and air, simply draws in pure atmospheric air. The compression or first return stroke compressing this air into the pre-heated vaporiser, and at the desired part of this compression stroke, the supply of liquid hydrocarbon is forced, in a spray form, on to the heated vaporiser which almost instantly changes it into a gas, it combines with the heated air; automatic ignition takes place and propels the piston which forms the working or second outward stroke". The system used is known as solid injection, and is the principle used by most present-day diesel engines. Patent No 15994, of October 1890, stresses the importance of isolating the combustible charge in the combustion chamber which is connected to the main cylinder by a narrow passage. Correct timing of the introduction of the liquid fuel ensures the prevention of pre-ignition.

Hit & Miss Engines
Hit & Miss engines were made by a multitude of engine manufacturers during their peak usage which was from approximately 1910 through the early 1930's when they began to be replaced by more modern designs. Some of the largest engine supplier's were Stover, Hercules, International Harvester, McCormick Deering, John Deere and Fairbanks Morse.
A Hit & Miss engine is a type of flywheel engine. A flywheel engine is an engine that has a large flywheel or set of flywheels connected to the crankshaft. The flywheels maintain engine speed during engine cycles that do not produce driving mechanical forces.
The flywheels store energy on the combustion  stroke and supply the stored energy to the mechanical load on the other three strokes of the piston. When these engines were designed technology was not nearly as advanced as today and all parts were made very large.
A typical 6 horsepower engine weighs approximately 1000 pounds.
Typically, the engine material was mainly cast iron and all significant engine parts cast from it. Small functional pieces are made of steel and machined to perform
their function.
Hit & Miss engines were made to produce power outputs from 1 through approximately 100 horsepower. These engines are slow speed and typically ran from 250 revolutions per minute (rpm) for large horsepower engines to 600 rpm for small horsepower engines.
They were used to power water pumps for cultivation, saws for cutting wood, generators for electricity in rural areas, running farm equipment and many other applications. Some were mounted on cement mixers. These engines also ran some of the early washing machines. They were used as a labour saving device on farms, and allowed the farmer to accomplish much more than he was previously able to do.
The engine was typically belted to the device being powered by a wide flat belt, typically from 2 - 6 inches wide. The flat belt is driven by a pulley on the engine that attached either to a flywheel or to the crankshaft. The pulley is specially made in that its circumference is slightly tapered from the middle to each edge, like an over inflated car tyre, so that the middle of the pulley is a slightly larger diameter. This keeps the design flat belt in the centre of the pulley.
Although thousands of out of use flywheel engines were scrapped in the iron and steel drives of World War II, many survived to be restored to working order by enthusiasts.
However in recent years engines with original paint have become more desirable to many collectors than repainted engines. Numerous preserved Hit & Miss engines may be seen in action at shows dedicated to antique engines.
Except for some of the big engines still in use in the oil fields, most have become collectors items. Nothing today sounds quite like a Hit & Miss popping along at a show. Let's hope these relics of the past will be here for future generations to enjoy.

Check out the Hit & Miss explanation video on YouTube:    https://youtu.be/fYKxwno6QUY 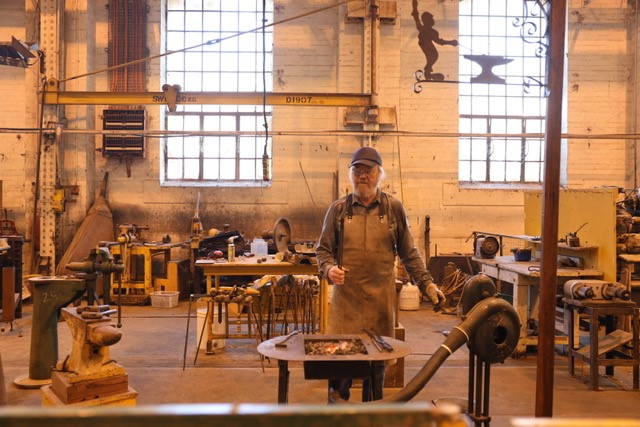