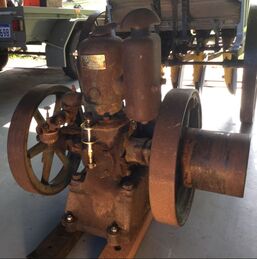 The club was formed in Perth, Western Australia​​ in 1982 and eventually settled in 1996 to its current location at the Midland Railway Workshops.
​
The club meets every Tuesday morning from 8am at the premises to conduct work on a variety of projects generally related to machinery preservation.
General meetings are held on the first Wednesday evening of most months at 7pm.
Most Tuesday morning work sessions are followed by a sausage sizzle lunch and socialisation by the members.  ​
​
The club aim is to preserve, restore, clean up, to make safe or rebuild to operating condition any form of plant or machinery that had been used on farms, in automotive or marine applications; objects thought to be worthy of displaying to the public.
The club has restored some of the old machines (lathes etc) from the Railway Workshop and these are used by members to make parts in order to restore the clubs and their personal machinery collections.

The club displays preserved operating machinery and other antique objects at several state-wide local shows throughout the year for the education and enjoyment of the show-going public.

The club newsletter "Old Ploughs and Pistons"  and the NHMA Newsletters are issued several times a year and copied below.

Download File
ENGINES FOR SALE by Members.
Members, contact web-master via e-mail in the MEMBERS ONLY section with engine sale details (Type, HP, Year, Remarks, Price, Telephone)
Items in this section will be removed when advised sold or after 1 month. Please advise web-master when engine sold.
DISCLAIMER
Articles and advertisements appearing in MPC Website are published in good faith on the understanding that the content is legitimate, and no responsibility for their accuracy is accepted.
LIST OF SUPPLIERS of relevant SERVICES or EQUIPMENT and PARTS.